A sign showing the different marking of the Pileated and Ivory-Billed Woodpeckers. It stands near where the disputed 2005 Ivory-Billed sighting took place.

If a bird sits in the woods and no one sees it, does it exist?

According to a group of academics, if the bird is the Ivory-billed Woodpecker the answer is no. And the “no” comes with the probability of being wrong at 0.0064%.

I came across this study in a paper titled Specimen-Based Modeling, Stopping Rules, and the Extinction of the Ivory Billed Woodpecker.[i] Using a statistical tool called the Poisson distribution to analyze specimen counts and “other reliable occurrence records,” the group declared the Ivory-billed extinct. However, unlike the ornithological Indiana Joneses who do their research by striding, fedora clad, into the mud and mosquito infested swamp, these academics pulled this off without the inconvenience of leaving their desks, iPads or lattes.

Of course their qualifier  — other reliable occurrence records — should be underscored, since “reliable” is a squishy term used by those wishing to squish, and it is always helpful to do research where troublesome data can be defined as unreliable, pushed aside and ignored. Why, after all, allow muddy footprints and bird droppings to taint an otherwise tidy piece of research, especially when the grunt work had already been done.

To extinction deniers and agnostics the latest extinction announcement merely induces a shrug. The ivory-billed’s departure is proclaimed with regularity between sighting reports from amateur birders or scientists who stray from their ornithological nest box. 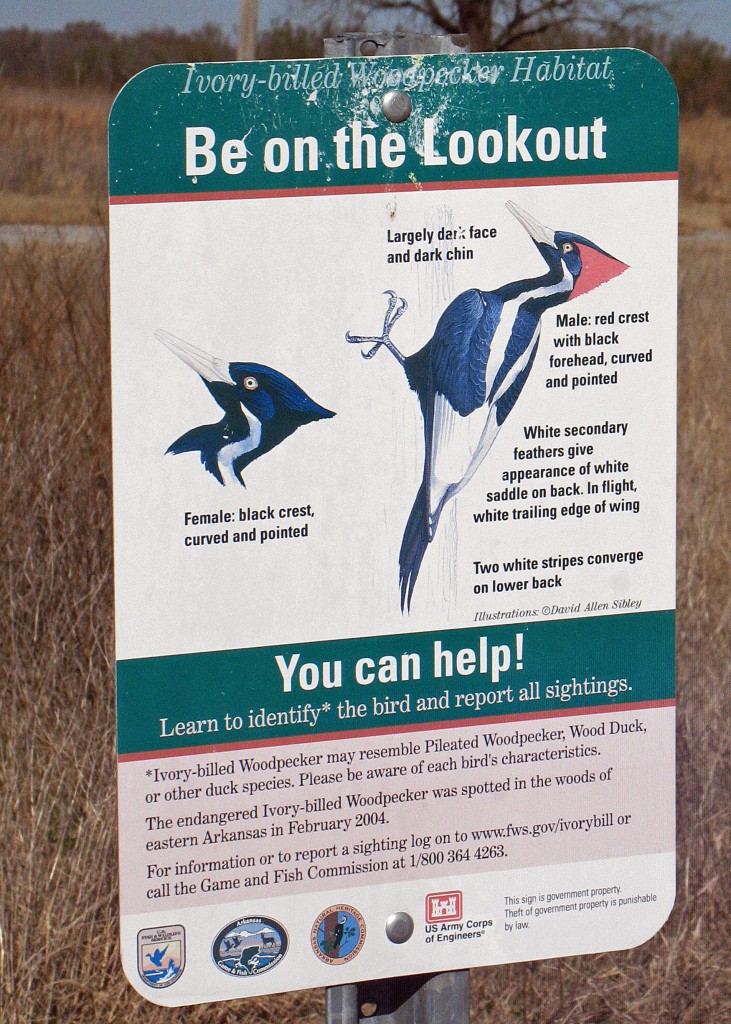 Another of a number of signed in the Cache River Refuge area advising visitors of the famous and possibly extinct resident and what to do if it’s sighted.

Academic announcements of this kind may satisfy those disposed to accept them, but there are those considered too scientifically challenged or romantically obtuse to agree with the conclusions. We pack our deet, binoculars and optimism and venture into the wilderness.

And to the unacquainted, a visit to this environment is to understand why some in academia would eschew fieldwork for a comfortable desk and a computer model, where a Poisson distribution may be applied in lieu of insect repellant, and where an iconic megafauna may be represented as a featherless algorithm.

To me, this conclusion was readily apparent during a recent visit to the 57,000-acre, Choctawhatchee River WMA of the Florida panhandle. The area is an almost impenetrable amalgam of bottomland forest, sloughs and swamps. Exploring it is a frustrating experience, requiring several types of conveyance, few of which can be found nearby. Moreover, the tree canopy is so dense that birding there is reminiscent of WW2 plane spotters who identified aircraft by their silhouettes in the clouds. Yet it is Ivory-billed habitat, or as close to it as exists today. It is also where Geoff Hill’s research team claimed to have found the ivory-billed in 2006[ii], a disputed discovery dismissed by the afore-mentioned study.

Meanwhile, outside academia, unaware of the recent announcement of the bird’s extinction, a motel clerk told me a birder claimed to have spotted an ivory-billed in the Bruce Creek area earlier in 2011. Bruce Creek, you should know, is a tributary to the Choctawhatchee and was identified by Hill as an ivory-billed hotspot, if “hotspot” is an acceptable term for a place where an extinct animal has been observed more than once, subsequent searches not withstanding.

Another witness was a local fisherman who freely claimed to occasionally see the ivory-billed along the river. When I challenged him, suggesting that he had really seen a pileated woodpecker, he stood firm: “No, I know a pileated. This one is bigger and has a white bill.” Then as if to insure his name would never be listed in any ornithological research paper, he added, “There’re still a few hanging on.”

These and other reported ivory-billed sightings, such as those in the Pearl River area of Louisiana and elsewhere, compete with the continuing efforts of scientists and ornithological heavyweights to dismiss them. Neither side of the dispute is willing to surrender ground. “I know what I saw,” says one side. “No you don’t,” says the other.

Some attribute the refusal to accept the bird’s demise to our troubled conscience — guilt traceable to human greed and arrogance, sins that brought about the wanton destruction of its habitat. Others attribute denial to idealism and a simple conviction that the bird is still alive. What birder, after all, can look at an old, gnarled bottomland cypress in a southern swamp and not think of the woodpecker.

What to believe? Take your choice.

But I’m conflicted. The evidence that the woodpecker did not survive its habitat destruction is formidable. Yet I want it to be wrong. My inner Don Quixote overrules my inner Mr. Spock, and like the majority of birders, I root for the woodpecker. Nothing would please me more than forcing extinctionists and skeptical statisticians to plug a new and reliable ivory-billed sighting into their Poisson Distribution and watch their algorithm melt into a gooey puddle.

In the meantime, those of us not yet ready to accept the loss will continue to explore the southeastern bottomland forests, listening for kent calls and double knocks.  We will view every woodpecker hole and old cypress as the possible denouement of our efforts. If a bird sits in the woods we want to find it and prove it’s there.

This entry was posted in Uncategorized. Bookmark the permalink.

8,020 Responses to The Extinction Dilemma